Despite David Beckham’s absence, the StubHub Center (LA Galaxy’s stadium) in Carson was full on the 28th of July for an entirely different style of competition, The CrossFit games 2013. In front of a very fit-looking crowd, who roared their support over a loud rock soundtrack, men and women from around the world competed for the title of ‘The Fittest on Earth’.

In a scene reminiscent of the Gerard Butler film, ‘300’, men and women sporting chiseled sixpacks unashamedly cut about the place wearing the brightest and tightest clothing imaginable. The feats of strength and endurance were remarkable, most notably Richard Froning’s overtaking of someone while walking non-stop across a tennis court on his hands. Sam Briggs (female winner and Rocktape UK athlete) performed consistently throughout the day, always appearing to come from nowhere, accelerating as her competitors fatigued.

The only thing nearly as ubiquitous as the impressive abdominals, was Rocktape. The most popular applications to help the athletes were shoulders, lower back and anterior knees. It was great to see so many athletes choosing to use RT when visiting the medical team between events, but I was most impressed by the fact that I did not see any tape peel or fall off during the two days we attended – quite phenomenal considering the heat and the amount of sweat being generated.

We’ll be attending several UK CrossFit events this year and we also offer short CrossFit masterclasses to teach athletes and trainers the basic of taping. If you’d like us at your Box or event, email us at info@rocktape.net 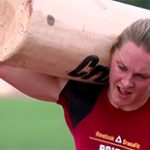 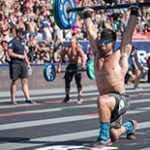