Rock and Rolling @ the London Marathon Exhibition by Natalie Crosby 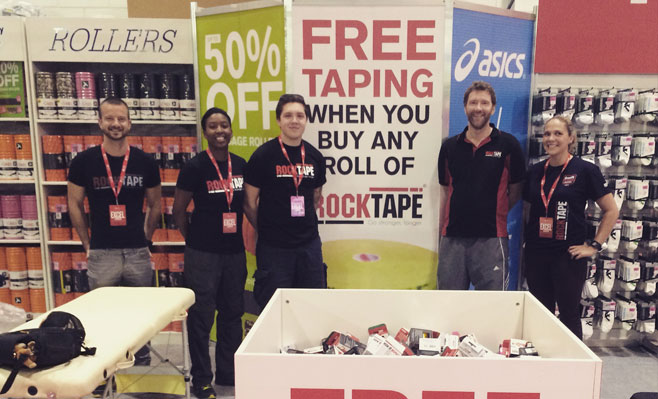 It’s been a hectic week but I am ready for my first taste of a RockTape event that myself and several other students have signed up for.

The event itself was held at the ExCeL Centre in East London and is for the tens of thousands of runners in the Virgin Money London Marathon, ahead of the big day on the 26th April. This was a chance for them to collect their runner number, timing tag and kitbag. As well as see what an amazing event they have signed up for.

We were scheduled to arrive at 10:30am, half an hour to the open of the first day of this four-day event. I didn’t know at the time but Paula Radcliffe was schedule to open the Exhibition.

After collecting my ExCeL exhibitors pass I tried to make my way over to RockTape. Stand 267, at the start this information felt like it would help but having wound my way past, NSPCC, Lucozade, Bupa, Skins, Sweat Shop and ironically, TomTom, it didn’t feel like it was helping at all. Eventually, I spotted the famiilar red and black motif and my fellow RockDoc’s.

We were armed with our RockTape t-shirts and tape and moved over to the much larger area given to us by the Sweat Shop (and no, this was unfortunately, not the one I passed earlier) where we set up beds and promotional items ready to sell and tape for free.

The first hour or two was pretty slow going, I hadn’t really taped any one but once the Lucozade DJ started playing and our first few customers were getting taped, everyone wanted to know how it worked? (I think I could work for RockTape I now know, that much about it) Would it help them finish the race? What does it do? I think I even had one guy ask if it was an alternative for nipple tape!?!?! The questions were varied, shall we say.

I was slightly nervous having not taped anyone else since the course in February, my first knee application was awful, so I apologise so much to my first customer but with the amount of traffic we got coming in after lunchtime I think we all felt like super RockDocs towards the end.

Knees and calves were the main problem areas, followed by Illiotibial bands (ITB) and achilles and last but not least hamstrings. Lets see what we have towards the end of the week.

Day two and I’d forgotten what an amazing buzz the Exhibition had, it was really contagious, so much so I may have to apply for my first marathon next year! (Forgive me if I take this back).

Today I found the RockTape stall with relative ease, and just like before, armed with our RockTape t-shirts and tape we moved over to the much larger area given over to us the Sweat Shop.

Now, I don’t normally do this because I never really get star struck or care enough about the, said person, to ask for a photo but once I’d spotted Dame Kelly Holmes I had to ask, and like a giddy schoolgirl I did. I always assumed that she would be down to earth and genuinely nice (not that I’ve ever met her before but just what I’ve gathered from what I’ve seen) and I was not disappointed, she was lovely and posed for a picture with me, we chatted for a brief moment and that was that, what a RockLegend, brilliant!!

Anyway, back to RockTape. The doors opened at 10am and from about 10:05am it was a steady stream of people at first one or two and as the day went on it felt like it was none stop, if you weren’t talking about RockTape, you were taping them and if you weren’t doing either you were trying to find a space, changing room or seat to tape someone. I don’t know if it was the free samples of energy jellies or Lucozade but everyone in the RockBand (sorry) were feeling the buzz around us and the event, which was amazing.

There must have been 100+ stalls there, everything and more you need for a marathon was on offer, I couldn’t name them all but in a nutshell, lots of running-shoe and sportswear companies, charities, travel agencies, international races, running magazines, protein bar, gel, drinks distributors, honestly, the list goes on and I’m even sure they had Q & A guest appearances from previous elite runners.

All in all, I thoroughly enjoy it, so much so I nearly spent the whole day there but after 9 hours I was physically drained. My favourite taping: achillies tendon, most interesting: osteitis pubis and most difficult ITB and knee in a changing room made for one!

Thank you to RockTape for the experience it was well worth it, Rock and roll on (I’m so sorry), RockTape level 2.