Unite and Bike for Heroes 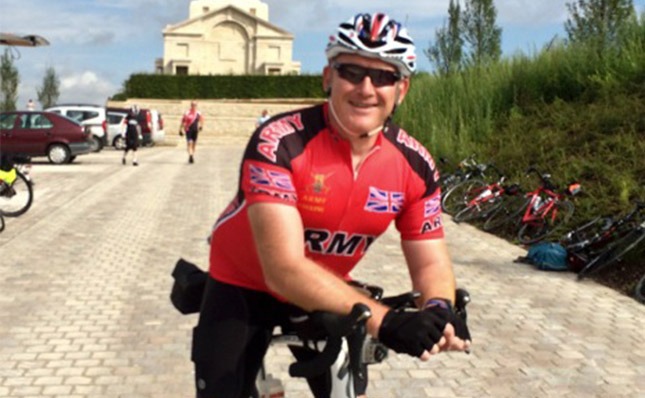 Just under a year ago, I decided to enter this event to commemorate the Centenary of the start of the Great War. As you will know, if you have followed my blog, I was fortunate enough to serve with the Royal Engineers for a number of years until being medically discharged in 1997. A large number of my friends and colleagues have been impacted by loss in conflict and I have lost several friends and this seemed a fitting tribute to their memories. I had also recently been bitten by the cycling bug so it was a perfect fit. I also decided to dedicate the year to raising funds and awareness for Blind Veterans UK and you can read more about their work and my motivations elsewhere in this blog.

I have had a superb year and have achieved a number of firsts (for me) with several highs (and a couple of hiccoughs) and have made many new friends along the way. I have had wonderful support and met many inspirational folk, so was very excited as we approached this ‘final’ event in August. However, I had not appreciated just how emotional the trip would be and what a superb end to the years fund raising.

And so it began – Stratford Intl to Folkestone – High speed train
The trip to Folkestone by train was unremarkable, as were my first impressions of the town when I arrived. Folkestone was gearing up for a big centenary parade on the 4th, with Prince Harry in attendance and there were bands rehearsing and police cordoning the front off, so I just had a gentle cycle around whilst waiting for the rest to arrive.

The first evening was a genteel affair, getting our admin packs and getting to know one another.  A few of us met up over a couple of drinks (and a mediocre) meal and friendships started to form.

Day 1: Emotional! – Folkestone to Ypres 110 km
We left Folkestone early on the 4th August, mostly having been awoken by the seabirds and noise of the preparation for Harry’s visit.  The weather was perfect for the 17 km dash to the ferry in Dover but the group was split up by the slight hill en route to the ferry (a 1km beast, hitting 12% just 5 km into the ride).  Boarding was uneventful and we made our way to the deck for the short trip to France.  Unfortunately, the ferry was delayed by an hour which challenged some of the timings for the first leg.  In Calais we regrouped and set off for Ypres.  The ride was very flat and easy riding across beautiful countryside interrupted by the odd very quiet village (all of which seemed to be closed, a recurring theme for the ride).  The highlight of the ride was the lunch stop where we had our first taste of the superb food laid on by Ashley.  Clearly, this was not going to be a chance to lose weight!  The cross over into Belgium was unremarkable and the onward journey flat and smooth.  Unfortunately, Dave came a cropper due to the somewhat alarming 45 degree level crossings!  Luckily he was able to continue and the bike was ok.  I also nearly wiped out on the cobbles as we entered Ypres.

Rebecca, who was also raising funds for Blind Veterans UK had arranged to lay a wreath for Harry at the Menin Gate as part of the Centenary Last Post ceremony and had very kindly asked me to join her.  We arrived just in time and made our way through the huge crowd, still in sweaty lycra to join the ceremony.  There was a huge crowd, with representatives from the Kiwi Embassy, the Legion Riders and 1st Edgmond Scouts to name but a few.  The ceremony was very solemn and as we marched back from laying the wreath, all I could see was the sea of red eyes as people gave their silent respect.  Afterwards, as we spoke with the other folk paying their respects, the dust did get the better of me, and a few tears were shed.  Later that night, after supper, we returned with Sallyann to light a candle for Lights out across Europe.  When the Menin gate went dark, it got a little dusty again!  This was to be a recurring theme for me throughout the week.  The magnitude of the loss and the sacrifice made by so many is commemorated so well, that it is hard not to be moved!
Plans for an early night, however, were scuppered and I stayed up until the small hours swinging the lantern and chatting about mutual friends with the Kiwi Defence Attaché, Lt Col Mike Beale 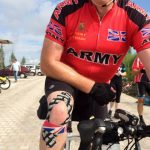 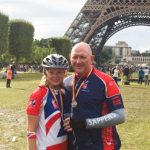 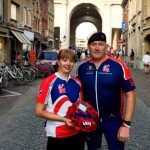