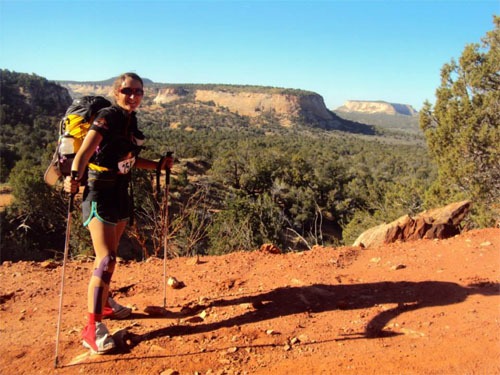 We received this wonderful email from a happy customer recently. Thank You Megan!

To The ROCKTAPE Team

I just wanted to drop you a quick line to say thank you for your wonderful kinesiology tape!

In April 2012 I had my 3rd knee operation and was told it was unlikely I would be able to run distance again. This happened mid way through me training for my first marathon, which would have been at the time of me recovering from surgery as it happened.

During the recovery process I was recommended ROCKTAPE kinesiology tape by my physio. The collective operations mean that I have minimal cartilage on the back of my knee cap and so the grinding motion of most sports risk the knee cap flaking, which has happened in the past. I was shown how to apply the tape to raise the knee cap slightly to prevent this happening and, with the help of the tape, have completed 2 half marathons, my first and second marathon (London and Edinburgh) and my first ever ultra marathon since February 2013; raising nearly £5000 for charity in the process.

I had a whole roll of ROCKTAPE with me for the ultra and used it for any pain or injury incurred, it was an ongoing joke that I looked like I was re-building myself!

I truly believe that my knee would not hold up without the kinesiology tape, it hurt during a 4 mile run without it, yet 169 miles passed with not even a twinge in my knee. I have booked 2 more ultras since completing the first, a 50 mile in January in Yorkshire and a 200k in Bhutan May/June – I will have my ROCKTAPE with me for both!

Anyway, please see below a photo of me during stage 4 of the grand to grand ultra I completed in September. I thought you might like the evidence.

Once again, thank you so much!