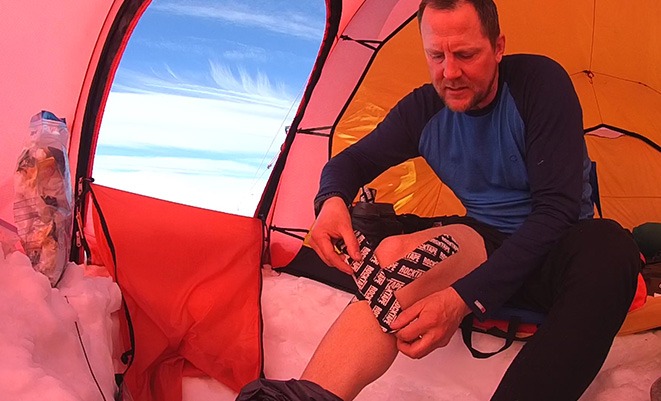 On March 25th 2015 saw me start the leg to Norway for Phase 2 of my expedition training. My alarm went off at 0355 for the taxi ride to T5 Heathrow – decent flight and 2 hours later I arrived in Oslo and put through the terminal with typical Norwegian efficiency. I had a few hours till kill before my four hour train trip to the mountains of the Hardangervidda National Park and my eventual start point for the exped, Haugastol. My excitement was growing every minute, so was my anxiety levels. To be expected considering the journey I’ve been on for the past couple of years I suppose.

I arrived at a train station in Ustaoset, piled my RAB bags on my bag and stumbled off the train to an amused Carl Alvey and his typically northern greeting of “ya alrighte”. I arrived at the most perfect time – dinner. I cannot describe the food at Haugastol M.o.H Hotel, it really is sensational and a real treat in the ay its run. A total family run business, but they have a knack of making you feel art of the family, a simply wonderful place. A quick debrief with Carl and I headed for my room to take in the day and decamp my kit.

0650 and the alarm is going off for my day to begin, little did it know I’d beaten it by an hour as the nerves were in full swing by that stage. I headed up for breakfast and was greeted by other guests who are always keen to talk about what they are doing and interested in what others are doing. Most of the guests at the hotel are there for snow and either spend their time on the slopes, or kite skiing. We agreed to do a kit inspection at 0930 which I was happy about – you see I’d already done 2 weeks intensive training at the Open Polar Training Course his company Expeditions 365 runs. A great course run by Carl and business partner Hannah McKeand. A tap at the door of my room, then the imposing figure of Carl walks through and begins the brutal assessment of my kit. In all it seems, I was pretty much there. The kit was fine, but sizing on a couple of items weren’t quite right – nothing to squabble about really.

That afternoon we started putting the kit for the pulk together in his workshop. Greatly enjoyed that as it’s the technical element that I like. Once that was done, the day was close to being done. We did a quick chat about my route, had another outstanding dinner and headed off to bed. Sleep was not a great friend again and I spent a long while lying with my mind in overdrive.

Today was a big day – it involved putting all my food together into the day packs. Not before we headed off to Geilo for some final bits of shopping. The day was long and an arduous task of removing the heavy bag of the expedition food to cut weight – all worth it of course, though I wasn’t at my most efficient in this task. I was being overly pedantic in my preps and Carl let me know that. I think my wanting to make sure it was ‘right’ got in the way of actually just bloody getting on with it. That afternoon we did the final bit of packing, had another outstanding dinner, and then headed off to my room. To my surprise, I think I was asleep before I hit the pillow and woke to the beep of my alarm 0650……..that was a rare occurrence and much needed

Breakfast was quiet for me as the nerves really had taken a grip of my by that stage. I turned into a jabbering wreck a couple of hours from the start time of 1100 – I was going for it, with words flying 14 to the dozen and making little sense. Carl was ready and I was ready – 1.5 hours sooner than we planned, so for the sake of me rambling on, we decided to head off. Put my harness on, skis on and we headed out across the fjord on our way toward Tuva. I headed out like a young bull and put in a crazy rapid speed for the first hour. Carl admitted he was blowing to keep up, I had a sweat on, but put that down to nerves and not the fact I was doing almost 6.5kph – way too quick. By the end of the first climb to the plateau and the eventual first night of camp I felt my speed early on. During the walk, Carl decided to let hit kite lose and I skied for most of the day on my own.

That night I set up camp on my own, with Carl watching intently making no comment until such time as we were inside and I was cooking dinner for us. His only comment was that I boiled the water too much and created too much steam in the tent. That was a simple fix and quite a confidence booster.

That next morning we decided that it was best I headed out alone from this point onwards. The pressure of having Carl following me and just wanting to get on with it myself was evident and I headed out to the white wonderland of the Hardangervidda plateau on my own.

What a refreshing and exhilarating thing to do. A lot of energy, sweat, tears and fear, had led me to this point and I took it with both hands.

Finally……………I was on my own and learning the craft for the big event later this year.

Overall the 16 days went well and I achieved everything I wanted to ready for a solo exped. All systems were as efficient as possible. The weather was unpredictable- thankfully as it won’t be a box of roses on the harshest continent on the planet.

It is with great thanks to the team at Rocktape for the support and product. It was used every day during my exped on my right knee. Though it must be said that in a cold environment the product works better than duct tape by a mile.

Needing to make repairs to my solar panel – cables issue – the tape held the join together perfectly. It also held my ski pole together after a clip failed. So it’s much more than a tape to help hold the body together, it really is the MacGyver of tapes.