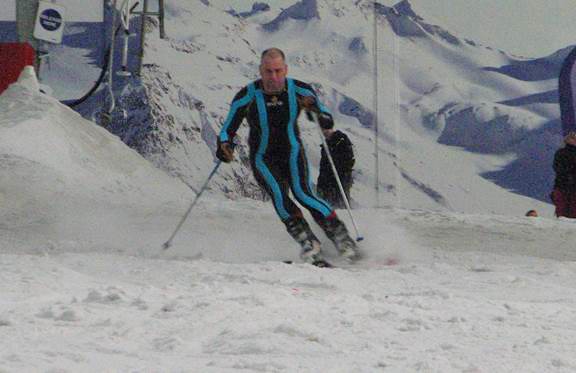 I used a skier dressed in ‘Skins’ compression gear and stuck the tape to the clothing as a visual guide.  Anterior, Posterior and Lateral tapings were applied according to the movement patterns that can be used in skiing. He was assessed initially to see where any restrictions were, which included left side bending and reduced forward flexion with a shallow lordosis.  Rotation was similar, reduced to the left.

What I asked of Richard (the skier) was to ski a narrow corridor of short radius turns, which would show the most movement patterns, e.g. rotation of the lower limb, separation at the pelvis and side bending of the torso, as well as extension and flexion movements.  Common issues in ski performance are related to lack of symmetry in movements and poor skiing posture.

With the tape applied to the skins it was easier to see where issues were arising in Richard’s skiing.  There was a lack of commitment in some of the turns, where he was either not using his inside ski or there was not the same degree of rotation going on through either leg.  In the longer radius turns the issue was the amount of lateral separation.

Following taping to the actual skin,(then wearing skins over the top to maintain scientific rigour) we repeated the same exercise and the results were very interesting.  The turn initiation (weight transfer and rotation of skis) was much smoother with a more symmetrical appearance.  The longer turn radius offered a smooth transition and potentially an increased edge angle (Richard was able to increase his separation and, therefore, his inclination against the snow).  When asked for his thoughts, he was quite surprised and impressed, saying that “everything felt lighter” and that the turn “felt easier to initiate”.

As well as creating a lot of attention (other skiers thought we were filming the sequel to Tron), I think there is definitely something here to investigate further, especially as the results were exactly as I’d hoped they’d be.

It was successful in getting attention from public and instructors and it would be useful when approaching the ski instructor/ coach market about how Rocktape can potentially influence technique for young and old athletes. The photos are not great (my camera is of low quality!)  but you can def get the idea.  I’ll attach some for you to see. 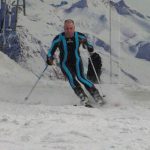 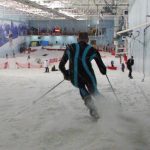