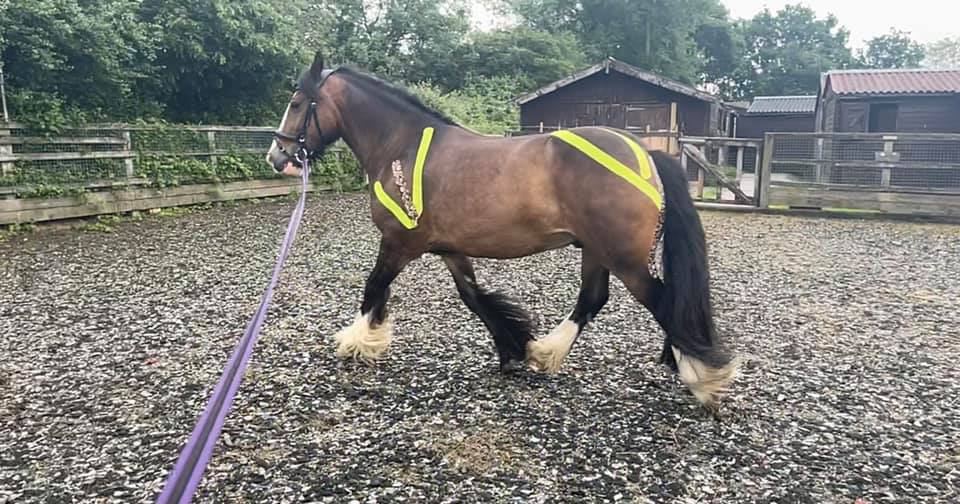 As is quite typical for his type, my Donny lad has a tendency to pull himself along with his forelimbs rather than to fully engage his back end and generate his forward propulsion by sufficiently pushing from his hind limbs. I don’t know a great deal of his background or what he was up to as a youngster but all the signs point toward the likelihood that he has done some driving and if he was being asked to pull, that is probably where this derives from. A result of this is a pattern of tension in his shoulders particularly in his working shoulder muscle group. When palpating, tension in the triceps brachii m. in particular is notable. I am working with Donny to improve this using various physiotherapeutic techniques one of which is kinesiology taping.
Rocktape UK is a hypoallergenic, elastic adhesive tape. A result of the cutaneous afferent stimulation and decompression caused by Rocktape application causes alterations to proprioception, movement and muscle activity to materialise. Rocktape is able to target biomechanical weakness, improving movement and reducing the risk of injury. It can also have an indirect effect on the alleviation of pain and soft tissue restrictions.
There are many varying theories surrounding the exact mechanisms of kinesiology taping effects and the mechanical, neurological and fluid effects which may alter biomechanics. Most suggested mechanisms are based on the Embryology Concept (Molle, 2016) which propounds the idea that the application of the tape on the skin can affect all layers of tissue and even organs because they are all intimately connected which makes logical sense to me!
Having completed a course with RockTape UK Equine back in 2019, I received certification for equine taping and Donny and I decided to give it a whirl.
When muscle taping, in order to influence movement, it is important to know where the origin and insertion of the muscles are. The origin is mostly proximal (closer to the centre of the body) and the insertion is often distal (farther away from the centre of the body). There are two taping methods which I used today. I used a muscle activation taping method on Donny’s gluteal and hamstrings and a muscle relaxation technique on his triceps brachii m. To activate his gluteals and hamstrings I applied the tape with tension from origin to insertion. Because of the tension the tape will recoil and when that happens it will recoil toward the origin of the muscle, therefore the recoil will support contraction of the muscle. To relax his triceps brachii m. I applied the tape with slightly less tension from the insertion toward the origin, this causes the tape to recoil toward the insertion supporting elongation and stretching of the muscle which is what we need in this area because Donny is very tense. Rocktape are a clever bunch because they have even produced equine specific tape which has more ‘stick’ than the human variety and is water resistant which is just as well because in this humidity and carrying slightly more weight than he should be, Donny was sweating like a pig.
About 30 minutes after application and once the rain finally decided to stop, I lunged Donny for 25 minutes. There was notable difference in his movement and I was really impressed by the difference it made. Whilst not perfect, he was so much straighter through his body, his hindlimbs were more engaged and particularly in canter he was swinging his leg under nicely – previously he might lose balance in canter or break into a trot. Despite the previous tension through his shoulders he was moving a lot more freely and seemed to stretch out in front more than usual. The pictures do not do it justice! Sadly I was by myself so had no choice but to work him on a circle and try and photograph it myself but the fluidity in his movement compared with normal was certainly improved.
I have seen first hand the difference that Rocktape has made to other horses too and would highly recommend anyone with a horse suffering any biomechanical weaknesses to give this a try! It’s an owner friendly, affordable adjunctive treatment to use alongside physiotherapy and appropriate training!
If you would like me to apply it for you or provide a session to show you how best to do it for your horse and situation, pop me a message and we can get you booked in!

I will shortly be conducting a 3 day trial to investigate the differences in biomechanical efficacy of RockTape application to a clipped and unclipped horse, at different time frames (immediately post application and 24hrs post application) and looking at different tension applications specific to anatomical areas. Watch this space and I’ll update you all in due course.
Kirsty Bolderston – Animal Therapist