Founded in 1982, the Race Across America (RAAM) is a non-stop, ultra-endurance event starting in Oceanside, California and finishing 3,078 miles away in Annapolis, Maryland. Crossing twelve states and involving over 190,000 feet of climbing, the race encompasses a magnitude of challenging environments including the Arizona desert, wind-swept plains of Kansas, Colorado Rockies and the unrelenting Appalachian mountains of West Virginia.

The first British wounded, injured and sick contingent to take on the RAAM, the Mind Over Matter (MOM) team was comprised of eight female cyclists who had sustained physical or psychological injuries as a result of either military or civilian life. The team were supported by eleven crew members including, several drivers and navigators, a crew chief, a chef, a sports psychologist and finally, me – a physiotherapist providing performance management services.

After being seriously wounded whilst serving with the British Armed Forces in Afghanistan in 2009, I spent over four and a half years undergoing complex reconstructive surgery and intensive rehabilitation. This experience served to provide an inspiring insight into the exigency of effective rehabilitation and I therefore decided to journey full circle; qualifying as a physiotherapist in 2017. Being asked to provide support to others who had shared similar life changing experiences therefore, was an exciting opportunity and one which I knew I would relish.

Preparations for the RAAM were led by Leadership Challenges, a not-for profit company which delivers programmes designed to build courage, resilience and leadership capacity through exposure to arduous environments. From the initial team training weekend in March 2019, it was clear the RAAM would be no weekend ride and require meticulous preparations to be successful. However, it is important to acknowledge the learning curve that participating in such endeavors presents. Therefore, a summary of my learning experiences during the RAAM are entrusted below. 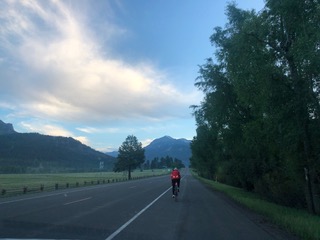 Acknowledging the heat exposure awaiting the MOM team, I invested time establishing an effective, evidenced-based heat strategy in order to reduce heat injury risk and improve performance. Cyclist acclimatisation therefore began two weeks prior to arriving stateside, with hot water immersion (in the form of a bath) used immediately after a training session; a tactic shown to reduces thermal strain during exercise-heat stress. Once in Oceanside, the cyclists were subsequently gradually exposed to heat stress during acclimatisation rides, which began with short reconnaissance leg spinners but progressed to an intense mountain climbing session three days before the race start.

Leaving the rolling surf of the Californian coastline behind on Saturday, June 15th at midday, the MOM team joined thirty-eight other teams as they set off on a life-changing adventure. The first stage of the RAAM involved racing through the undulating hills of California, starting with a long twenty-three mile unsupported section which included The Glass Elevator; a section of steep climbing and a multi-hairpin descent. From here the route pushed east through California and into the Arizona desert, where temperatures could reach forty-five degrees in the shade. The team consequently faced a baptism of fire and it was easy to see why the initial twenty-four hours of the RAAM was renowned for breaking teams and leading to a high number of race withdrawals. Adequate hydration and appropriate nutrition was therefore paramount to success.

Prior to the race start the team has discussed strategies to mitigate the risk of heat injury and it was essential to monitor team hydration and nutritional intake. Thankfully, the role of chef was entrusted to a professional and, as well as providing food with the nutritional requirements, the chef was equally an expert at providing food for moral. These meals with further supplemented by fresh fruit, carbohydrate energy bars, protein recovery drinks, a selection of dried fruit and nut mix and copious volumes of caffiene. To ensure adequate hydration, the routine of carrying one bidet of chilled water and a second for electrolytes was instilled in cyclist from the start and the support crew became excellent at providing chilled cans of soda, ice popsicles and ice bags; a concept adapted to try and alter the riders perception of the heat. Importantly, the support crew became adept at checking for any signs of heat injury and were particularly mindful to monitor the spinal cord injury cyclists who’s inability to regulate body temperature placed them at a higher risk. Fortunately, the heat strategy used for the team was effective, however heat management is not the only threat to riders during the race.

Injury prevention, also known as performance enhancement, is key in order for a team to successfully complete the RAAM. As an eight personteam, it is reasonable to think that the loss of one or two riders due to injury is sustainable, however the inherentincrease in pulls required by the remaining riders has the potential to force them into the red; a place unsustainable for long. Strategies to manage injury were therefore adopted several months before race start and, alongside a progressive cycling programme, comprised of twice weekly strength and conditioning programme, an accurate bike fit, monthly nutritional advice, exceptional person hygiene and over the phone psychological support.

The challenge of providing physiotherapy support to a team already comprised of individuals carrying significant, long-term injuries meant that any ‘niggle’ reported, not matter how small, needed to be managed efficiently. Consequently, the physiotherapy tool box of manual therapy, soft-tissue therapy, taping, exercise and load management was in constant use, with riders requiring round the clock support to ensure they were physically able to spin the pedals. Due to the ever-changing environment of the RAAM route this led to an array of interesting treatment backdrops including; truck stop car parks, the snow-capped mountains of the Colorado Rockies, the grassy fields of the Kansas plains and the rolling hills of West Virginia. However, the role of a performance manager is also eclipsed with that of an individual possessing multi-roles; physiotherapist, commis chef, supermarket shopper, shower builder, laundry man, bike mechanic, water fetcher and pot washer. As such, day and night gradually merged into one as sleep deprivation started to set in.

Due to the relentless shift pattern, both riders and support crew were exposed to sleep deprivation. The battle with the heat in California and Arizona had meant a slower average speed over the initial twenty-four hour period than planned and, as a consequence, the nine hour shifts originally scheduled had to be shortened to six hours. Although this was effective in increasing our average cycling speed, the knock on effect saw physical and psychological fatigue swept across the team; with two cyclists requiring an enforced shifts rest to avoid complete shutdown. As in any high-pressured team, psychological strain is common and on several occasions, as expected, trivial issues became blown out of proportion with riders and crew relationships tested. However, the beauty of all sharing a common goal, that of completing the RAAM, meant the lack of sleep and brief period of ‘storming’ was all worthwhile.

The Finish and Final Reflections. 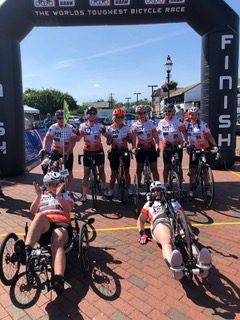 On June 23rd, 2019 in an amazing 8 days, 0 hours and 12 minutes, the Mind Over Matter team completed the Race Across America. All eight riders crossed the finish line in Annapolis, Maryland, home of the United States Naval Academy, to the exuberant cheers of spectators and the bright lights of the media. Interestingly, even though the final destination of the MOM team was the same, the journey taken by each individual competing in the RAAM was different. However, it is the shared experience of taking on such an endeavour which provides a platform to enable participants to move forward with a new purpose regardless of future challenges.