When it comes to skateboarders is always been hard to show the positives of sports therapy and performance recovery.   Skaters have predominantly viewed treatment as ‘uncool’ or ‘jock’.  If you are getting taped up or seen doing pre skate stretches then it was likely that someone would start giving you some grief for it.

I am one of the few individuals that is deeply emerged in the skate world, but also educated in sports science and sports therapy.  I have worked at several international skateboard events and worked with some of the biggest names in action sports, from Tony Hawk to Mat Hoffman.  The funny things, the more elite the athlete the better the understanding of the benefits sports and physical therapy can have.  I also find the older the athlete the better the understanding, and increased need for treatment.  So I have set out to try and educate the ‘new school’ skater, the up and coming skaters and the professionals who are in the prime of their career and really wanting to push their ability into new levels.

Over the last few years I have worked with these guys and this year is the first time that I have been non stop at an event.  Vert  Attack is the worlds largest vertical skateboard contest outside of the X-Games.  Vert skating is where the guys are skating on 10ft plus half pipes and performing huge Arial tricks.  The event is held in Malmo, (Sweden) and attracts the biggest international names in skateboarding.  The beauty of this event is that nobody is competing for money, they are simply competing for kudos.  The city of Malmo contribute to an amazing skateboard facility, which in turns pays for the skaters to come and stay in Malmo for the event, it’s a great atmosphere and a chance for the international skateboard community to come together once a year, have a great contest and demonstrate how much skateboarding is still progressing.  There are several disciplines including, juniors, Girls, Masters, Legends and Pro/Ams.  All of whom compete through qualifiers and finals over a 4 day period.

The beauty of having such a large range of disciplines is that the older legends who look for treatment show the younger guys (and the kids) that’s it good to get seen, recovery properly and receive treatment for injuries.  Basically, they influence the younger professionals to do what they can to skate better and for longer.  Being a skater myself, it works to my favour.  I have an understanding of the injuries, the demands on the body and the fact that the majority of the time, the guys (and girls) just want to get back out there to skate in their heats. 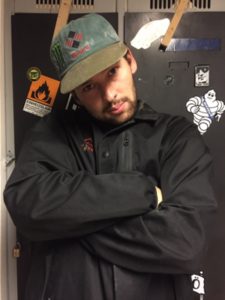 This is the 3rd Vert Attack I have been to, and to my surprise the busiest by far.  I arrived in Malmo a day early having left the house at 4am.  The idea was to get a day skating to myself before the contests starts and begin working.  However, I was greeted by X-Games gold medallist Sam Beckett as soon as I walked in Bryggeriet  skate school around 9.30am asking about a recent injury he had sustained.  My treatment room had not been set up, so I unpacked my bag and began to treat Sam on the benches in front of the ramp.  Sam had taken a slam (skate slang for a big fall) a few days prior to the contest and had damaged his shoulder and neck.  Given the situation and the time, we had to keep things simple so we did some fascia work to relieve the stiffness and really utilised the ROCKBLADE.  We then proceeded to tape both shoulder and neck with some branded ROCKTAPE.

With everyone seeing the X-Games Vert Gold medallist getting treatment (in plain view of the audience and the other skaters), it did not take long to form a queue with other skaters all looking to get treatments for their old and new injuries.

After the first day, things did not slow down.  After 5 skaters being knocked out whilst competing, several strained hamstrings, popped shoulders and numerous other injuries, I was completely worn out by finals day.  The great thing about the finals day is that nobody wants to miss the action, so I got to enjoy watching the guys I had been treating ripping the ramp to pieces.

The list of athletes I worked with over the event was fast, including some of the most influential skaters over the last 15 years.  Guys like Rune Glifberg, Jimmy Wilkins, Alex Perelson, Andy scott and Jocke Olson. 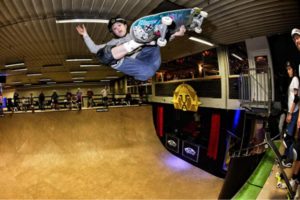 It was also very refreshing to see the youngsters coming to see me for treatment.  As skateboarding is progressing so is the level that this kids skate at.  8-12 year old skaters going 6ft plus above that ramp, which means that they are 16 ft plus from ground level.  The amount of impact that this is having on their body is huge and something that has not really happened before.  The two leading youngsters, Alessandro Mazzara and Tate Carew both complain of painful SI joints on the right side.  This is the side that they favour when bailing tricks, taking to their knees to slide down the ramp.  As they do not have any muscle mass the shock is transferring straight into their SI and lower back, causing the boys a lot of pain.  We found the stretching, myofscia work (mostly rockblads) and Rocktape really helped relieve the pain and keep the guys skating at their best.

One area of the contest that really stood out for me was the girls.  The level of girls skateboarding has really stepped up.  Infact the girls would easily compete within the Pro contest now and easily hold their own.  They are also leading the way in terms of utilising sports therapy to over come injury as well as injury prevention.  There are no pre-conceived ideas that treatment is uncool with the girls.  I have been working with the girls for over three years, with one of my returning clients being the amazing Allysha Le.  Allysha has had several shoulder injuries, including surgery her left shoulder to stabilise the shoulder and stop it dislocating.  Her right shoulder is also damaged through compensation and overuse when performing certain tricks.  Allysha relies heavily on Kinesio tape so after treatment we would always tape her up with her favourite Rocktape designs. 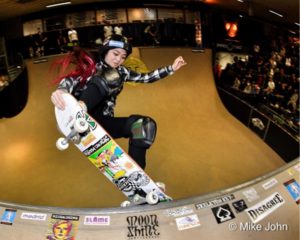 Overall, it was great to see that within each Final (7 skaters per final).  I had worked on over 50% of the skaters competing to win.  This was the first time I could really see the skaters accepting treatment without judging and using the service to their advantage.  It feels like the tables are starting to turn and treatment for these guys and girls is almost cool.  As soon as they realise how much it helps injury recovery, performance recovery and ultimately injury prevention.  The more they understand that they spend less time on the injury table and more time doing what they love to do…… Skateboarding.